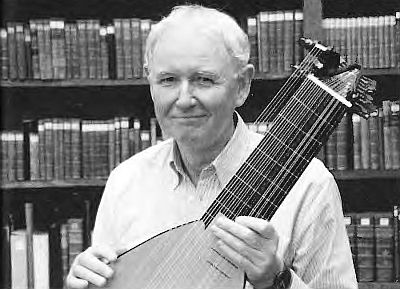 Free downloads of the entire output of lute editions and facsimiles of TREE EDITION, bequeathed to the world by Albert Reyerman in his last year.

Note: It is not in the spirit of the bequest for us to ask money, but if you don't have your own printing facilities and really need a paper copy of any of these books, please contact the secretary and we could discuss running off individual copies to order, just for the cost of paper, copying, comb-binding and postage.

told in July 2020, by its founder, the late Albert Reyerman who died on 10th December that year; translated in De Tabulatuur 120, November 2020.

‘Man muss das Unmogliche versuchen, um wenigstens das Mogliche zu erreichen’
'You must attempt the impossible, to attain the possible, at the least’

Some time ago, Ciska Mertens of the Dutch Lute Society asked me if on the occasion of the 40th anniversary of TREE EDITION one I would like to give an interview. After some consideration I thought it might perhaps be simpler if I told the story myself of how it all started, and how it developed.

For the story I must go a little further back in time. When I was about 14, I was a member of a scouting troop. Unfortunately, none of the boys could play the guitar to accompany our scouting songs. Because I was the only one who could read sheet music the boys collected money and bought me a guitar. I bought a book to teach yourself to play the guitar. If you know how the circle of fifths works and learn a dozen guitar chords, you can get pretty far with it, accompanying simple songs.

When I was 20, I started more seriously on the classical guitar, trying to continue my self-teaching. But over time I realised I wasn't too interested in the classical, romantic, repertoire of the guitar. What I really liked was renaissance music, written originally not for guitar but for lute. At the time, there were very many editions available with transcriptions of Elizabethan lute music for guitar, especially music by Dowland. Then there were recordings of this music from Julian Bream, so that was me now completely addicted to lute music.

When I was 30, I had a renaissance lute built. In retrospect I understood that it was an instrument in the tradition of the luthier Hans Jordan. So it was of good craftsmanship, but fairly heavily built and not ideal in terms of sound. I had my next renaissance lute built by Helmuth Bohr, already more on the road to good lutemakeing. Later I studied with the lute player Hubert Hoffman in Munich and got to know the lutemaker Andreas von Holst. From that moment I had all my my lutes made by Andreas von Holst: a renaissance lute, an arciliuto, a 13-course baroque lute and my beloved 11-course baroque lute after Joachim Thielke, which I still play on; it is a fantastic instrument. Those lucky enough to get an instrument from Andreas von Holst to play or own will know what I am talking about.

As I immersed myself in renaissance music, I wondered more and more: where are these pieces from? Where do they originate? Where are the prints located? And if there are manuscripts where are they to be found? How do you come by the original material? In 1979 I met the American musicologist Douglas Alton Smith, who was in Munich at the time on his investigations for the full edition of the work of Sylvius Leopold Weiss. After a tip from the Viennese lute researcher Josef Klima Douglas drove to Ebenthal Castle at Klagenfurth in Austria. Klima guessed there might be a lute book in the library, possibly with compositions by Weiss. In Ebenthal Douglas found not one, but a whole stack of lute books. He made some notes and went back to Munich and thence to London, as part of his research work, supported by the Alexander von Humboldt Foundation. He asked me and two friends to go to Ebenthal to take a closer look at his finds. Those two friends were the amateur lutenist Dr. Georg Dauer and the amateur bass player Ernst Robert Langlotz. At the time I was professionally engaged in photography, so I could supply cameras and other things to equip our small expedition well. In Ebenthal, after a search, we found yet more books than those Douglas had already discovered.

We photographed our finds page by page, and had the films developed in Munich; Douglas sent the images to London, for the books with viola da gamba music to be catalogued by the Viola da Gamba Society, while he himself immediately started work on the catalogue of lute music. Douglas wrote a provisional report of the finds for Early Music. The German version of this article appeared a little later in the magazine Gitarre und Laute. Today we know the find is indeed a true musical treasure: the Goess collection from Ebenthal is the largest music collection for lute, baroque guitar, viola da gamba and archlute in private possession.

A short time later I met the lutenist Stefan Lundgren who had moved from Basel to Munich. We considered whether we should not form a publishing company to make lute music public. At the time I received a microfilm of a lute book from the British Library, Michelangelo Galilei’s, Il Primo Libro d'Intavolatura di Liuto (1620). After getting it in this format, I suggested that his work should be the first that our publishing house published. The publisher would be named ‘Reyerman and Lundgren’ with the nickname TREE EDITION. And this is how we did it: pooling our capital, founding the publishing house and publishing the book. This brought a certain worldwide reputation, which incidentally derived from the quality of the compositions of Galileo and not our publishing skills!

The second book that we published, as Reyerman and Lundgren, was Stefan's textbook for the renaissance lute. With this book, however, our views diverged so much that as publishers we have each gone our own way. At first I was upset and sad because of this, but I soon realised it now it was easier to pursue my own preferred focus as publisher. The main purpose was to set up a publishing house publishing mainly annotated facsimiles.

In 1985 I went for the second time, with musicologist Tim Crawford, to Ebenthal. This time we examined the books in situ, more closely. The then-reigning Graf von Goess had a lot of faith in us and allowed me to take the manuscripts to Munich to prepare a facsimile edition with the correct technical equipment: 'Yes, just take it but do bring it back'. Without the trust and the generosity of Dr. Leopold Goess (deceased in 2005) Ebenthal's musical treasure could not have been published at that time. And just to remind you of the production conditions of that time, there were no PCs, no scanner, no internet, no digital cameras, no double-sided laser printing, no printing on demand. Making reproduction material involved manual photography. As a reproduction photographer I have the right knowledge and skills to create useful facsimiles. My job as a photographer and my passion as a lute player were the essential conditions for building and developing TREE EDITION.

Tim Crawford wrote the introduction for the first, and further manuscripts from the Goess collection. The French musicologist Francois-Pierre Goy became involved and wrote the preface and the concordances for the gamba books. The complete Goess tablatures have been published over the course of 20 years. And it was 20 years before we could present a first preliminary table of contents.

Simultaneously working on the publication of the Goess tablatures I started working on other facsimiles from a wide musical and historical spectrum and I was looking for lutenists and musicologists who were qualified to write about these sources to write. That was and is my principal wish: not only to publish facsimiles, but also to find people find that can write the background to illuminate this music, to make a contribution to music history, music sociology, and so on.

Indeed this is the moment I like to say: I am a ‘publisher only’. That is to say: and investor and seller. The greater part of the success of TREE EDITION over 40 years I actually attribute to the editors. And if you look at the list of people who have worked together over those 40 years, it reads like a Who’s Who of lutenists, and of musicologists engaged in lute music. Without wanting to pass over others, I want to mention two people especially because of their special relationship with the Goess manuscripts, whose publication was and is so important for TREE EDITION, but who also for me personally have great significance; many relationships and friendships have grown, which first originated in making publications. First of all, the Amsterdam scientist Jan Burgers. Jan edited the Collected Lute Music of John Johnson, a complete edition of the lute music by Francis Cutting and a complete edition of lute music and ensemble music with lute obbligato by Ernst Gottlieb Baron. Recently Jan has realised a full edition of the lute music by Johannes Fresneau, for TREE EDITION. Fresneau, of French descent, lived and worked in the Netherlands and his compositions include pieces in the Goess collection, which originated in the Netherlands. These are publications that can measure up to Diana Poulton’s book on John Dowland, or even surpass it in quality. The other is Francois-Pierre Goy, whom I have already mentioned in connection with the Goess manuscripts. Together we have produced many other lute editions. At the time of writing Francois-Pierre is on the point completing a catalogue raisonné of the Goess manuscripts to appear in the near future. Anyone who knows the articles, essays and editions by Francois-Pierre will know that an excellent job is to be expected here.

The research into the Goess manuscripts regarding lute and gamba is by no means complete. Again and again new facets open up, from a practical, musicological and sociological perspective. In addition, there is the question of cost, the expense of individual manuscripts, also in a modern setting, or monographs at TREE EDITION. As a publisher I have never imposed any restrictions in this regard. What counts in any expenditure is the quality and the contribution it makes to the opening up at that moment of the lute universe.

That's what I have to say about my publishing house, whose publications are nowadays used, read and played around the world. I am infinitely happy about that. The collaboration with of the editors of the editions is of significance and importance to the world of lute music. This collaboration is also personally important for me.

I would like to thank everyone who worked with me. I also want to thank all those around the world who have purchased our publications. I have the impression that many of them are dedicated amateurs. I have received letters stating that without TREE editions they might not have got so far in their efforts to find their way in the world of lute music and develop themselves. I see that as a great recognition. I would also like to mention the libraries that have let me have age-old manuscripts on loan, on trust, so I could reproduce the originals. I especially like the Music Library of Leipzig and the University Library of Rostock. I am very grateful for everything I have experienced in 40 years of TREE EDITION. I salute all editors all those who are enthusiastic about the miraculous world of the lute and its music.