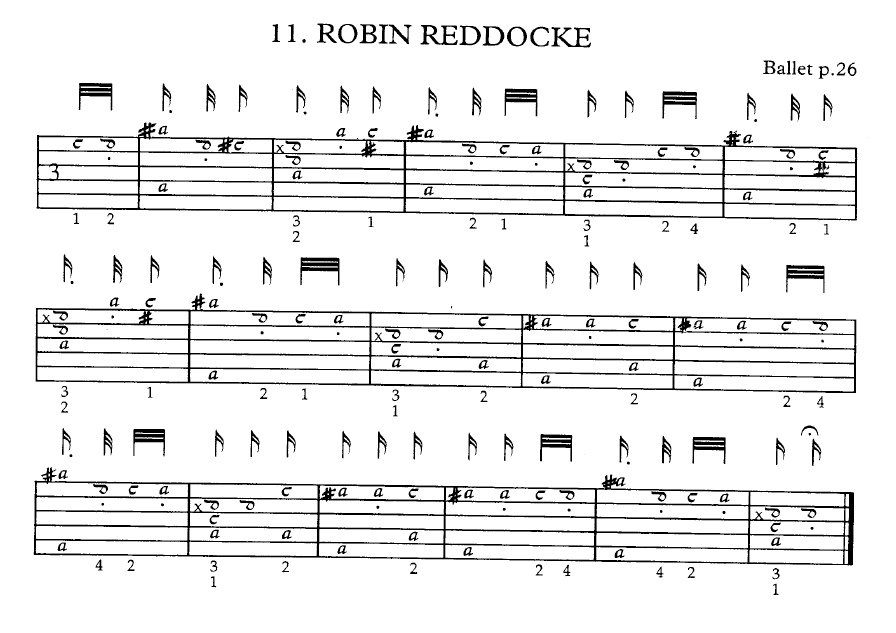 This charming little tune comes from the Ballet lute book, a manuscript which includes ornament signs. Lute music in general was heavily ornamented with graces performed by the left hand alone, creating fast groups of notes slurred together, by pulling off and hammering on notes above and below the written notes. (These graces are distinct from division-style ornamentation, which is plucked by the right hand). Many sources omit ornament signs, because they were so personal and integral to the playing style that most scribes didn't bother to write them down, and because in printed sources their inclusion vastly complicated the printing process. Unfortunately, some modern lutenists take this absence of signs as a license to play whole recitals without any ornamentation, which is a very unhistorical position, akin to cooking without seasonings. There is often uncertainty today about what individual ornament signs mean; they may not be standard from source to source, or even from piece to piece within a source, and many articles explore this topic. It may not be obvious which note is intended to be ornamented, because scribes generally tucked the signs wherever there was space, above, below or to the side of the tablature letters. For present purposes, all one needs to know is that individuals ornamented pieces differently, that everyone can easily acquire some simple, useful and uncontroversial ornamentation techniques, and that some ornaments are better than none.

Robin Reddocke conveys clear information about the general density of ornamentation which was expected (the Ballet manuscript is not the only one to be so profusely ornamented), and the points at which ornamentation can be added - in every case on strong beats and important notes. It uses two different ornament signs, in contexts which allow for consistent interpretation. Learn the piece without ornaments first, to familiarise yourself with the tune and its phrasing. Pay particular attention to where the stresses fall. Remember that in triple-time pieces, the downbeat is the strongest, and the third beat is also relatively strong, with the second beat being the weakest of all. Next, look at the two types of ornament sign. The hash sign occurs on open strings as well as fretted notes, so any consistent interpretation of this sign can only include notes higher than the written note. The x sign, on the other hand, occurs only on 3rd fret notes, so can include the note(s) below the written note.

I suggest that for this lesson the hash sign is interpreted as follows: pluck the written melody note, play the note above it in the scale (this may be one or two frets higher, depending on context) by hammering an appropriate left hand finger onto the string, and then pull that finger off the string, to sound the written note again. (Example 1a) You can break this down into the written note plus the hammered note (Example 1b), then the hammered note slurred down to the written note (Example 1c), before putting it all together. If the hammered-on note doesn't sound clearly, there are several possible reasons. Your initial pluck might have been too tentative; try a good healthy forte to start. Your finger may be landing too far from the fret. The fret may be chewed up and need replacement. You might have hammered the finger down too slowly, thus damping the string in the process. Check those points, and keep trying until the hammered note sounds cleanly. When you have achieved that, try the second half of the ornament, starting by fretting the note above the written note (you can pluck it for now), then pulling the left hand finger away so that the written note sounds. The finger should tweak the string lightly as it leaves, to inject a bit of fresh energy and thus sustain. This is a pull-off. If the second note doesn't sound cleanly you may have waited too long before lifting the finger, or you may have lifted it too slowly, thus deadening the string, or you may not have given that all-important tweak to the string. Keep trying until you can slur a pair of notes cleanly, then try combining this with the hammer-on. You should end up with three notes of ex. 1a. It is very important that the left hand remains as relaxed as possible; the ornamenting finger should be dabbing and flicking the string very lightly and quickly, not mashing it into the fingerboard. You may find it helpful to concentrate on the lifting off of the ornamenting finger, rather than the hammering down. Be careful not to press harder than necessary with the other left-hand fingers.

You can now experiment with the different effects created by playing this ornament faster and slower. A slow version will sound like a triplet, a fast version will add a crisp accent to the beginning of your melody note. When you are fluent with this technique you can also try a multiple version, by hammering on and pulling off again (example 1d). This is particularly suitable for long notes, and stronger stresses. It is also possible to interpret the ornament as starting on the note above the written one, and including one or more pull offs down to the written note, especially if the preceding melody note is the note above.

The x sign requires the note below the written one. The easiest interpretation is to simply invert the pattern of the hash sign ornament, plucking the written note, pulling the finger off to sound the note below, then hammering the finger back on to sound the written note again. (Example 2a). Break it down into two halves, as with the hash sign ornament, then put it all back together. Multiple versions are possible, as is a version starting on the note below the written one (example 2b). This can be tricky as it involves starting with a note which is not written in your music; try pencilling it in as a reminder. It is also possible - indeed likely - that this sign could sometimes indicate an ornament involving not just the note below the written one, but also the note below that, resulting in a little mini scale of three ascending notes (example 2c). Practise all of these options at various speeds, and aim for a delicate, airy result; ornaments must sound easy, not effortful. When you can do them fluently on single notes, add the rest of the chord around them. It is often desirable to spread the chord which includes the ornament, but it is also important to learn to ornament an unspread chord. Remember than an ornament adds dissonance and emphasis, both of which are affected by whether or not a chord is spread. If you learn all of the variations on just these two simple ornaments, you will add a huge palette of expressive possibility to your playing, even on very simple pieces.