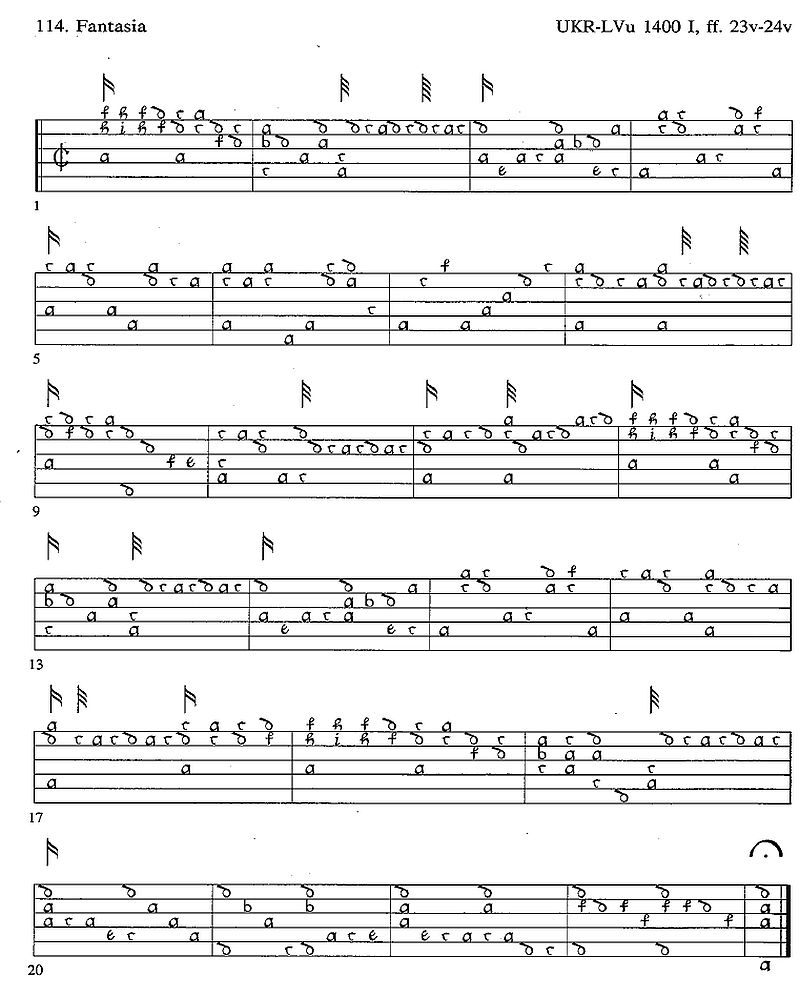 This piece, the final one in the Society’s ‘114 Early to Intermediate Pieces’ collection, definitely lies at the intermediate end of the book's difficulty spectrum, but I have chosen it because it offers an opportunity to focus on one technical issue in detail. The piece makes frequent use of parallel thirds, a texture with which many players struggle, so in this lesson we are going to explore the various possibilities for negotiating these.

Both of the above options require a subtle touch, to avoid a colourless series of identical accents, and to preserve as much legato line as possible. A common problem with sequences of thirds is that the chords become clipped and choppy, and all legato is lost. The usual culprits are right hand fingers spending too long ‘getting a grip’ on the string before sounding the notes, and the solution is to ensure that fingers approach the string in the right configuration to immediately grip the string and release it. Push against the strings’ tension to get that grip, rather than making exaggerated movements of the fingers along the string before release.

For the left hand, we have many possibilities. Because sequences of thirds are relatively infrequent in the renaissance repertory (6ths and 10th are much more idiomatic, and thus more common), it is hard to find any help in the few renaissance sources which include fingering. So what are our options? Some players lead very strongly with the left hand index finger, which gives a firm sense of location, and usually gives accurate shifts, but at the expense of all legato. Some will use very strongly position-related fingerings, staying in one position as much as possible, and making lots of small string crossing hops with all fingers. This is usually smoother than the former option, but essential shifts will often land at unfortunate points within the beat, leading to bumps in the line. My recommendation is to use a combination of these techniques, and to allow the fingering choices to be guided by the rhythm as much as possible. A shift after a strong note will always be much more audible than one after a weak note, so try to find fingerings which don’t require shifts or crossings within strong-weak pairs. The sequences of 3rds mostly come in 4-chord groups, so try to shift between the 2nd and 3rd chords; this will neatly hide your shift in the natural articulation between beats. This will sometimes lead you to shift more than would otherwise be necessary, but to good effect in terms of dynamics and smooth lines. For example, in the 1st bar, one could play the 1st 3 chords without a shift, but a large shift is then needed after a strong beat, in order to play the 4th chord. I would reset the fingering for the 3rd chord, to give a smooth transition to the 4th - in this case I’ll move to 3rd position, and use an extension; that then gives me an articulation between beats 1 and 2, and a smooth transition within beat 2.

A final tip; frequent use of momentary, short barrés over just a couple of courses can be of enormous help in achieving a legato line. For example, in the 2nd half of bar 1, putting the index finger across 2 courses at the beginning of the beat, and hinging it up after the 1st chord saves a cross-string hop. You may find it easier to treat the fingering as a 2nd course placing which is then flattened across the 1st course, rather than a partial barré which is then lifted; this ensures that the fingertip is well-placed to stop the 2nd course cleanly.