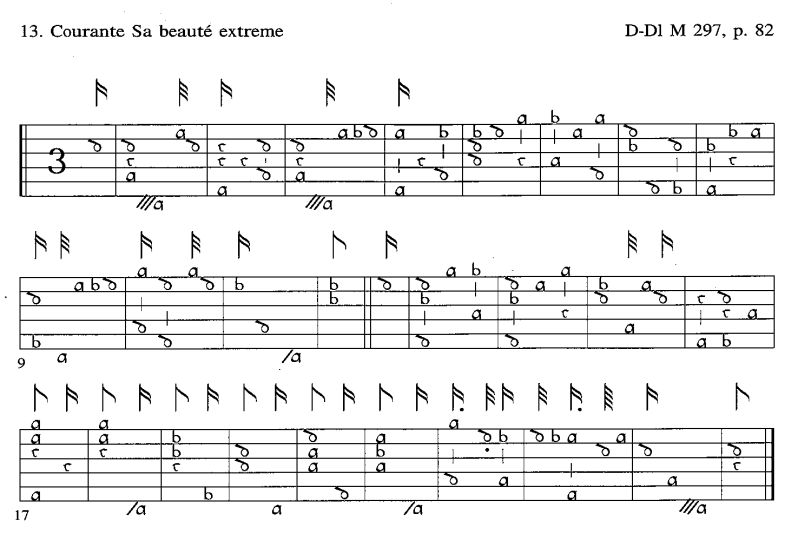 This lesson looks at the ‘Courante Sa Beauté extreme’, no.13 in ‘114 Early to Intermediate Pieces’. I chose this because it offers a good introduction to an important French style of music, and to the often vexing issue of locating one’s bass courses on a 10 course lute. This courante is typical of much early 17th century French lute music, in that it has a rather thin texture, with much independent movement between treble and bass. This is not exactly the elusive ‘stile brisé’ (where the individual lines are further broken up so as to reduce the texture to single notes bouncing around the lute’s various registers) but it is definitely leaning in that direction.

First things first; the 10 course lute, and this style of music, work best with a thumb-out technique. If you do not already have a thumb-out technique, this piece is a good vehicle for acquiring one. It does not have to be the full thumb-out position necessary for 18th century lute music, but if you are learning this in addition to a thumb-inside technique, you have to go further than the ‘thumb opposite’ technique which sometimes results from a half-hearted effort to play thumb-out. The thumb will stay largely down among the bass courses. The middle finger takes the place of the thumb in single-line treble passages and plays the strong notes. The index finger takes the light off-beat notes in both techniques. The main problem for many players is finding a good contact point for the fingers on the strings, giving a firm sound without too harsh a tone. It helps to keep the fingers very relaxed and to roll the hand a tiny way towards the bridge so one plays off the little finger side of the pads, rather than right on the end of the pads. It is easier to get a good sound with several courses between the thumb and finger notes, so practise first on widely-separated notes, and gradually close up the gaps until you can play adjacent courses with good tone.

Locating the bass courses takes some practice. The 10th course is impossible to miss but can be quite hard to pluck well, especially if it is at the limit of your reach. Take care not to hook the end of the thumb, or to place the thumb at a very steep angle to the string - this will merely wipe it rather than plucking it. The other bass courses can be harder to locate; the first step is to teach your hand the spacings on your lute, by playing each bass note in turn together with a suitable chord, or with some consonant treble note. When this is comfortable and reliable, move onto downward octave jumps with the thumb, playing say the open 4th course then the open 7th (F), a fretted e or e flat on the 5th course followed by the open 8th course, etc. Get used to moving the thumb as early as is reasonable so you do not have to make a last-minute lunge for a distant course. Because the angle of thumb presentation gets progressively harder to maintain on the lowest courses, pay special attention to the contact and the sound you produce. Be particularly careful to pluck the two strings of each course simultaneously. A swift, light rest stroke is the best way to achieve this, bringing the thumb to rest on the next course; this means you also keep track of where your thumb is!

The courante needs to move at a fairly brisk speed to achieve the correct effect. Eventually you should be aim to be counting one in a bar rather than three. Aim for long lines in the melody, to avoid a lumpy off-beat effect, and watch out for the hemiolas. Because the bass notes are often not played at the same time as their companion chords, so one must be careful to note which bass notes belong with the previous chord, and which with the next chord. Take care to hold treble notes if their associated bass note arrives later, and to hold any fretted bass notes until their companion trebles are delivered. This will help deliver some helpful legato phrasing and a sense of line, in spite of the often spiky textures. Some damping otu of unwanted resonances from previous bass notes may be necessary at various points, especially if you have modern covered bass strings. Some ornamentation would be expected; at the very least cadential trills will supply a nice finish to the ends of your phrases.