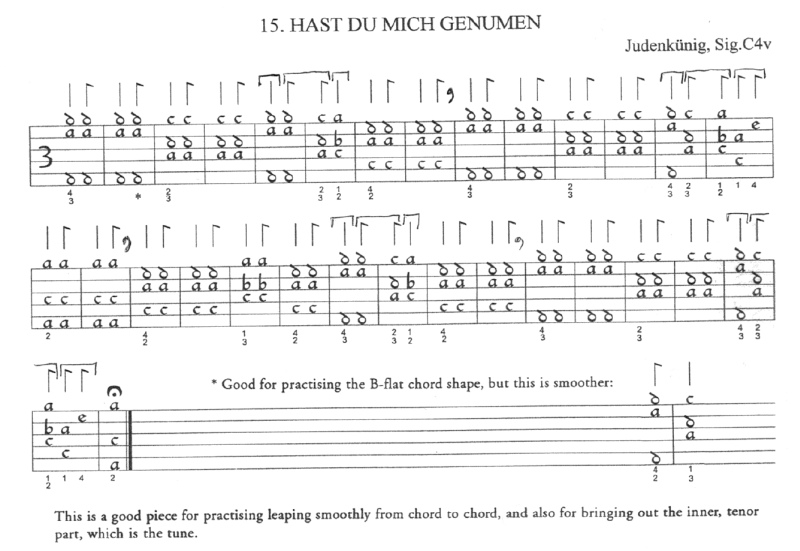 For the right hand, the main difficulty is that all of the 3-part chords will be plucked by the thumb, index and middle fingers, so it is hard to get any variety into the sound. Bringing out the middle voice of the chords is particularly important because, as in many 16th century pieces, that is where the tune lies. A good way to check that you are getting good contact with all courses is to play the notes of a chord separately first, so your ear knows what to expect, then pluck them simultaneously and listen out for a missing voice, or conversely, a voice overpowering all of the others. If you are playing on an octave-strung 6c lute, you will also have to find a good balance of the fundamental and octave strings on the bass courses. Getting plenty of thumb or finger onto the string is the answer; catching the strings with a narrow corner of a fingertip guarantees a thin sound and an uncontrolled dynamic. Make sure that every digit has good contact with the strings before releasing them. The plucking of a 3-part chord is actually partly a pressing action as well as a pluck; the pluck involves a slight convergence of fingers towards thumb - a sort of 'pincer' movement, but much of the energy comes from pressing into the strings. This can be very light and very swift; think of bouncing off the strings rather than plucking through them. The pincering happens at the very last moment, so you get good grip on the strings immediately before their release. At first, DO NOT spread any chords. As you get to know the piece you will probably want to spread some chords, but this should be a musical choice, not a technical default. It is harder to play the piece cleanly without spreading any chords, but this greater precision and control should be your aim.

In order to achieve light and shade, and subtlety of phrasing without spreading lots of chords, the touch of the right hand is critical, and much practice time needs to be devoted to experimentation with this. We do not want every chord to come out at exactly the same volume as its neighbours, otherwise the piece will be extremely boring. First, work out where you want strong beats and where weak beats. I would suggest as a starting point, in bars where there are two identical chords, play the second one lighter than the first. Where there are two full bars' worth of the same chord, play the second bar a little lighter than the first. This will immediately give some shape to your phrases. Exaggerate the dynamic differences; play the first chord really loudly, and the second chord really softly, just to be sure that you CAN get dynamic variety. Many players think they do this, but the difference is actually inaudible when the result is recorded! You can refine your phrasing when you are satisfied that you have a big palette of dynamics available, but start with bold, simple gestures which are clearly audible.

Look out for hemiolas; these are points in the phrase where two bars combine to make one bar with a longer triple beat. (You have to spot them via the rhythmic details, since the barring remains the same even through the hemiolas; a bar with a short-long rhythm is usually the second bar of a two-bar hemiola figure.) The 3rd beat of the 1st hemiola bar is played more heavily than it would otherwise be, (it is the second of the three 'big beats') whilst the downbeat of the 2nd hemiola bar is light, and the middle beat of the second bar is heavy. The hemiolas are usually the penultimate gesture of each phrase, and when properly played, they add tremendous vibrancy and spirit to the piece. I have marked the hemiolas with square brackets, to help you get used to spotting this very common rhythmic figure, and also added commas to indicate the main phrases or 'breathing' points.