The Lute Society: About the Lute

A Brief Introduction to the Lute

'Now divine aire, now is his soule ravisht, is it not strange that sheepes guts should hale soules out of mens bodies?' —William Shakespeare, Much Ado about Nothing.

Shakespeare was only one of many writers of his day who attributed to the lute the power to transport the listener into a kind of ecstasy; for throughout the Renaissance the lute's ravishing tone made it the most esteemed and admired of all musical instruments. The fame of the greatest players spread through all Europe, and the doors of royal courts and palaces were open to them (a number were consequently employed as spies) while instruments by the most famous makers could fetch astronomical sums.

The origins of the lute, however, lay outside Europe. The lute derives its name, as well as its distinctive shape, from the Arabic 'ud, an instrument which is vey much at the heart of Arabic musical life to this day. 'Al 'ud' means 'the wooden one', a name perhaps coined to distinguish the 'ud from instruments made from gourds or with parchment soundboards. It came to Europe in the Middle Ages, perhaps brought back from the Crusades, or via Moorish Spain, or Sicily, where the thirteenth century King Manfred von Hohenstaufen was a keen player. Throughout the Mediaeval period the lute, which then had only five 'courses' or pairs of strings, was played with a quill plectrum—again like the 'ud. Playing with a plectrum limits the kind of solo music that can be performed, and so the lute was often played in consort with other instruments, perhaps improvising over a drone or ground, playing dance tunes, or being used to accompany song.

The lute really came into its own in the late fifteenth century when it was realised that it could be played with fingertips instead of a quill. This meant that music properly composed in parts could now be played on the instrument. With the addition of a sixth (bass) course, the development of a more elegant, elongated body shape, and the invention of a system of tablature for notating its music, the lute attained a new classical perfection, and the stage was set for a musical craze that was to last over 150 years. 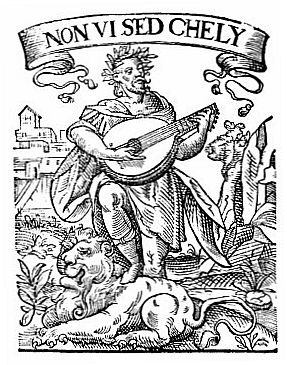 It is not hard to see the appeal of the instrument. Light and portable, a harmonising instrument far cheaper and easier to maintain than keyboards, it was (and is) enormously versatile; it was used to play dance music, popular tunes, arrangements of vocal music and song accompaniments, and soon generated a solo repertoire of its own, in the form of preludes, passemezzi (a sort of Renaissance twelve-bar blues) and the most refined and expressive fantasias. It was seen as the heir of the ancient Roman cithara or lira, which gave it a further boost in an age obsessed with Classical literature. Above all, it was the lute's ravishing sound which made it so admired. While the essential design of the instrument (six pairs of strings tuned in fourths, with a third in the middle) is similar to that of the modern guitar, the sound is very different: low-tension gut-stringing and the peculiar resonance of its pear-shaped body give the sound of the lute a delicacy and richness which cannot be matched by its brash modern cousin. In a sense it is an instrument closer to nature than the modern guitar.

At the end of the sixteenth century experiments and innovations began to be made. A seventh pair of bass strings was added, then an eighth, then a ninth, eventually getting up to fourteen pairs; the intention being partly to increase the range of the instrument, partly to be able to play in a low register when accompanying male singers. To cope with the extra strings a second, longer neck and pegbox might be added. New tuning schemes were devised. From all these experiments a variety of new instruments were evolved, designated today as 'Baroque' lutes. The biggest, the 'Roman' theorbo or chitarrone, was a loud bass instrument, used mainly for accompaniment, with a long second neck which made it up to six feet long. In France a smaller instrument of either eleven, twelve or thirteen pairs of strings tended to be favoured; the first seven pairs could be stopped with the left hand, and the rest of the strings were played 'open' like harp strings. Overwound strings, invented in the mid-seventeenth century, could be made to produce a very low pitched note with only a short string length, which meant that it was possible to go back to the older, more manageable size of instrument, while still having a large number of bass strings.

By the end of the seventeenth century though, the days of the lute were clearly numbered. The rise of the orchestra, opera and the commercial concert hall put a quiet instrument like the lute at a huge disadvantage; it simply couldn't be heard in a big noisy room. Rising living standards meant that more and more people could afford keyboards, which were easier to play, had a wider octave range and could realise more complex harmonies than the lute. Classical literature was taken a little less seriously than before, so the lute's associations with the cithara and lira of ancient Rome counted for less. In 1727 the French author Titon du Tillet wrote that 'the difficulty of playing it well, as well as its little use in concerts, have almost made it disappear. I do not think one could find in Paris more than three or four venerable old gentlemen who are still playing the lute'. Many amateur musicians now favoured the five-course 'baroque' guitar, which was far easier to play than the lute, being mainly used for strumming lively Spanish dances. By about 1750 the instrument was more or less dead, though one or two offshoots, such as the German 'mandora' persisted.

The lute and its repertoire were never quite forgotten, however, and from the end of the nineteenth century a revival began. In England, the early music pioneer Arnold Dolmetsch started to make and play lutes, while in Germany lutes (lute-guitar hybrids, really) were widely played by the Wandervogel hiking clubs, attracted by the instrument's associations with pre-industrial, pre-bourgeois past. The early music craze of the 1970s, and the recordings of Julian Bream benefitted the lute greatly, and happily standards of both making and playing are now pretty high.

Over its long history a truly enormous repertoire was created for the instrument. American scholar Arthur Ness has estimated that 25,000 pieces survive for the Renaissance lute, and probably as many for the Baroque instruments—and that is only the music specially notated in lute tablature, not counting music from the Mediaeval and Baroque eras which is written in normal staff notation. Indeed three quarters of lutenists today are ex-guitarists who have been seduced by the amazing riches of this repertoire. The lute witnessed not one but a succession of Golden Ages of composition. The first of these was in Renaissance Italy, where the greatest player, Francesco da Milano (1497-1543) shared with Michelangelo the nickname 'il Divino', the divinely-inspired. When he played, it was said, all thoughts turned to heaven. The music of Francesco and his contemporaries aspires to grace, elegance, and a certain stylish playfulness; similar in spirit perhaps to the early Italian Renaissance paintings of Botticelli and his contemporaries where everyone seems to be dancing. Mid-sixteenth century Spain produced a school of fine composers, playing the vihuela (a lute with a guitar shaped body) whose (rather serious) compositions are well-known to guitarists today. The next high point came in Elizbethan England, with the sweet-melancholy songs and fantasies of John Dowland, and his contemporaries. The Baroque lute produced two major schools of composition; in mid-seventeenth century France where the Gaultiers, Dufault, de Visée and others created a stately and self-assured style of music; and in early eighteenth century Germany, where Bach wrote for the lute, and the last great lutenist, Sylvius Leopold Weiss wrote suites of preludes and dances in a beautiful arpeggiated style.

The lute is rich not only in repertoire but in symbolism. Its refined sound has given it courtly associations in East and West: for Arabs the lute was amir al - 'alat, the sultan of instruments. In the hands of angels it symbolised the beauties of heaven; it was further used as a symbol of harmony, while a lute with a broken string (as in Holbein's famous painting 'The Ambassadors') stood for discord. From ancient times it has symbolised youth and love. Ancient Mesopotamian seals show maidens playing long-necked lutes in the cult of Ishtar, goddess of love and destruction, foreshadowing countless images of the lute in love scenes in Renaissance painting. What could be more romantic than a man singing to the lute outside a lady's window? Conversely, it could be an emblem of lust or lasciviousness: in the hands of an older man it symbolised scandal and degeneracy. If the lute's sensuous and delicate tones evoked the pleasures of love, the fleeting nature of its sound, and the physical fragility of the instrument made it a fitting emblem of transience and death: it is often included, sometimes alongside a skull, in Dutch still life paintings of the Vanitas variety, illustrating the vanity of worldly existence.

Where can you hear lute music today? The CD presses of the recording companies seem to be churning out lute music CDs at the moment, most of them of a good standard. Three well-known players, Paul O'Dette, Jacob Lindberg, and Nigel North have recently recorded the complete works of John Dowland, and there have been half a dozen recent releases of the music of Sylvius Leopold Weiss. A recent poll in Lute News magazine showed readers' top five lute recordings to be: Fantasia de mon triste, Chris Wilson (Metronome); Music from the Royal Courts of Europe, Julian Bream (RCA), John Dowland, complete works, Paul O'Dette (Harmonia Mundi); Rosa, Chris Wilson (Virgin Veritas) and Bach Suites, Nigel North (Linn). Discovering the music of the lute is an Alice-through- the-keyhole experience: what appears to be a very small world of sound grows ever larger until one realises that as many different moods are expressed in the lute repertoire as in the Classical orchestra repertoire, or in the worlds of jazz or folk music. So it's worth listening to something from each of the 'Golden Ages' sketched out above. That said, one should not really judge the lute from recordings. Recording equipment has not yet been invented which can capture the magic of a live performance of lute music, with all its subtleties of tone, so it is worth going to hear one of the top performing artists if you have the chance. It changed my life; it could change yours . . .